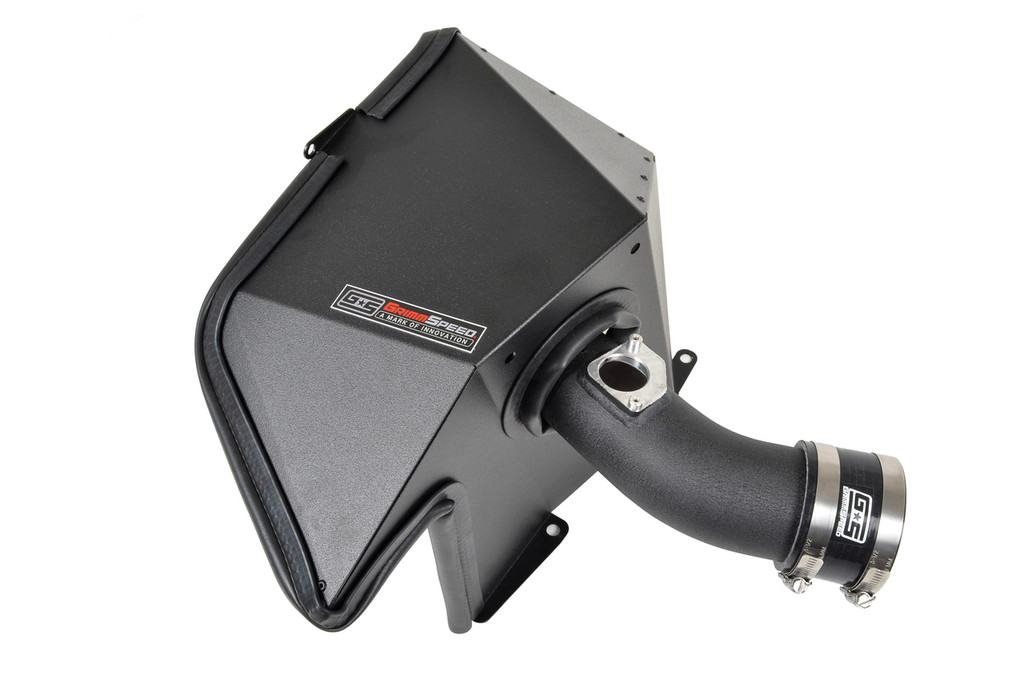 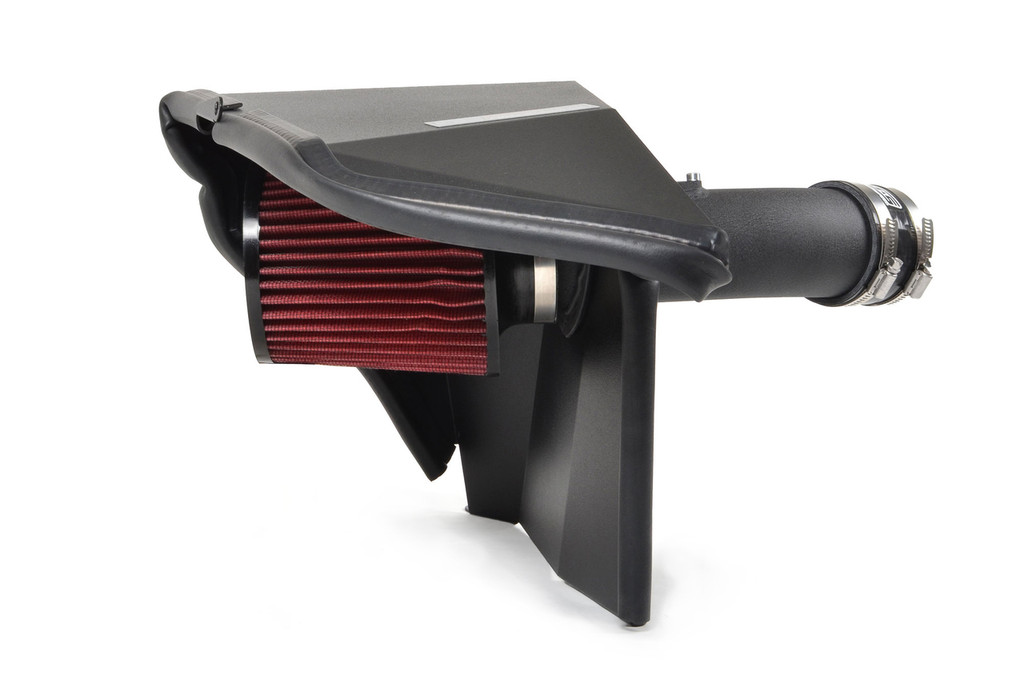 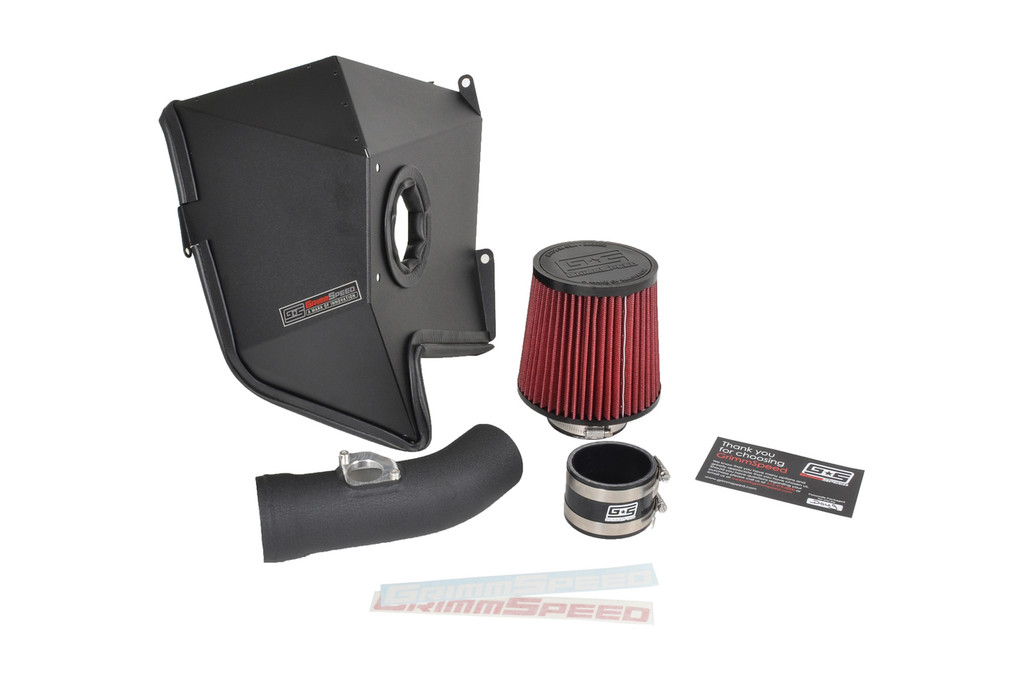 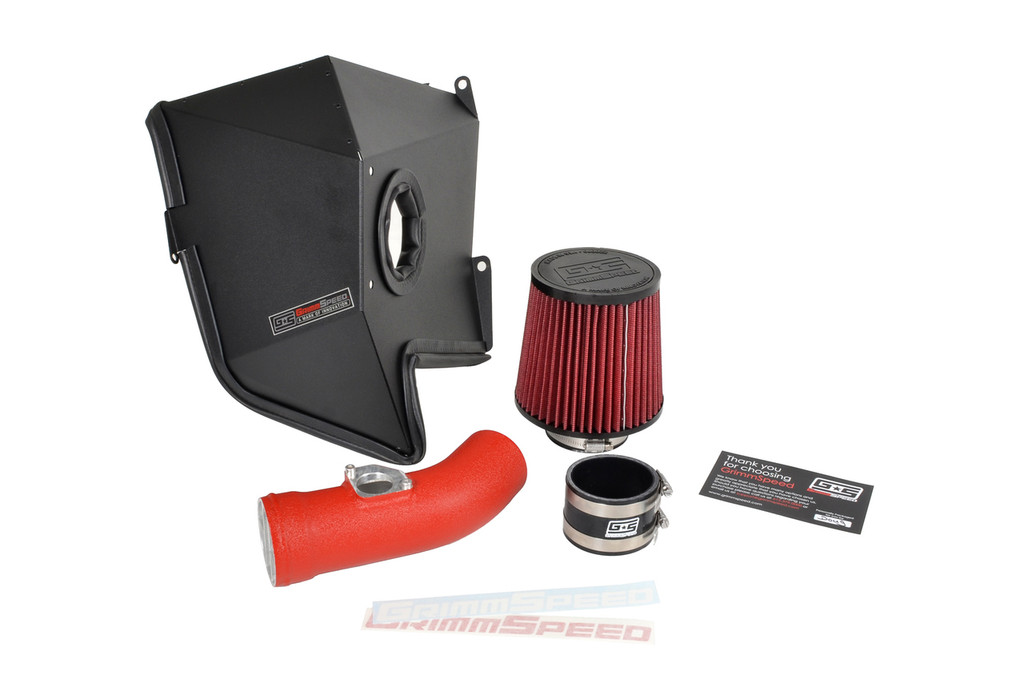 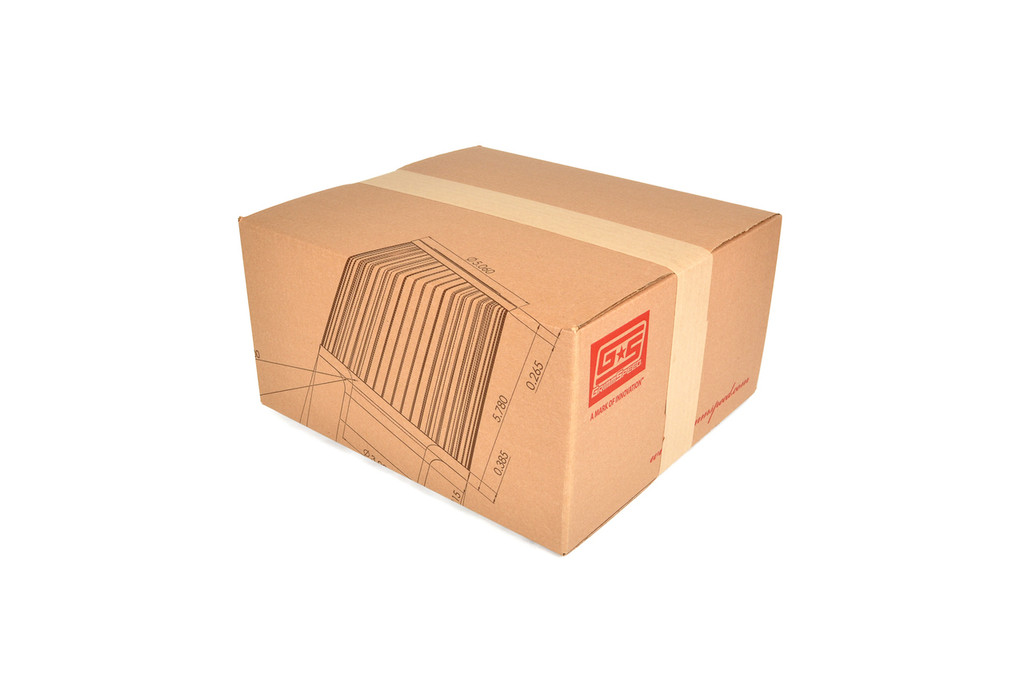 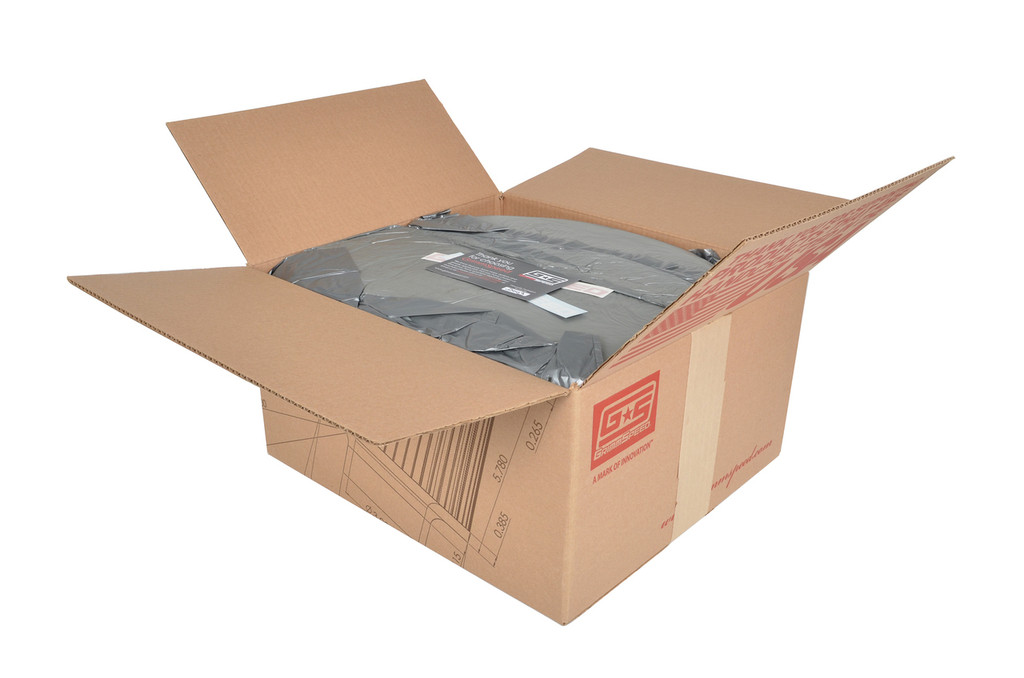 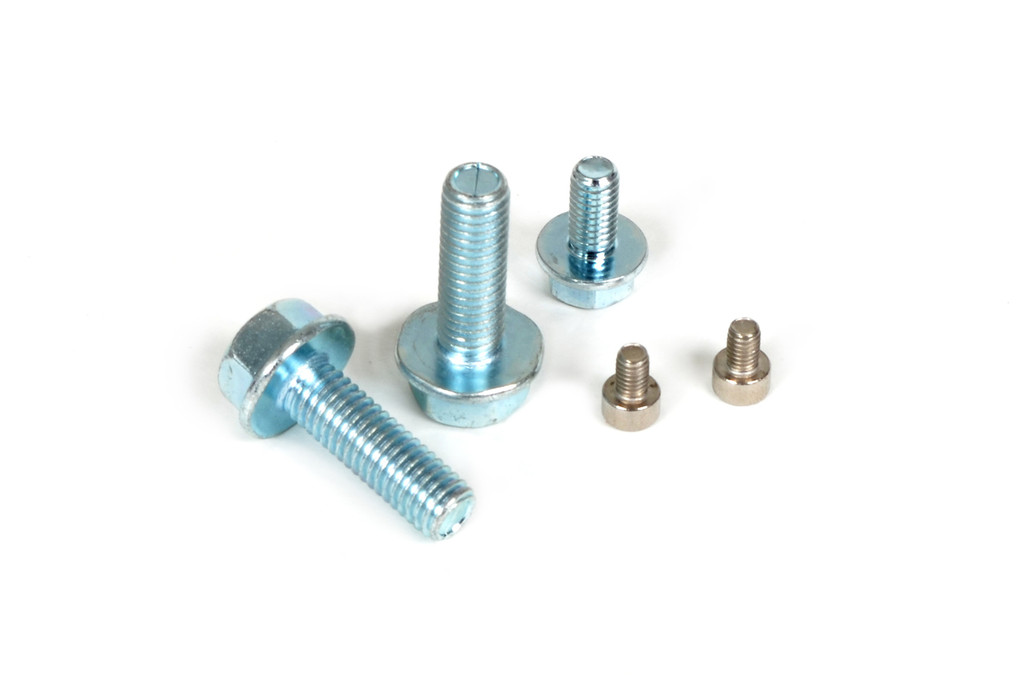 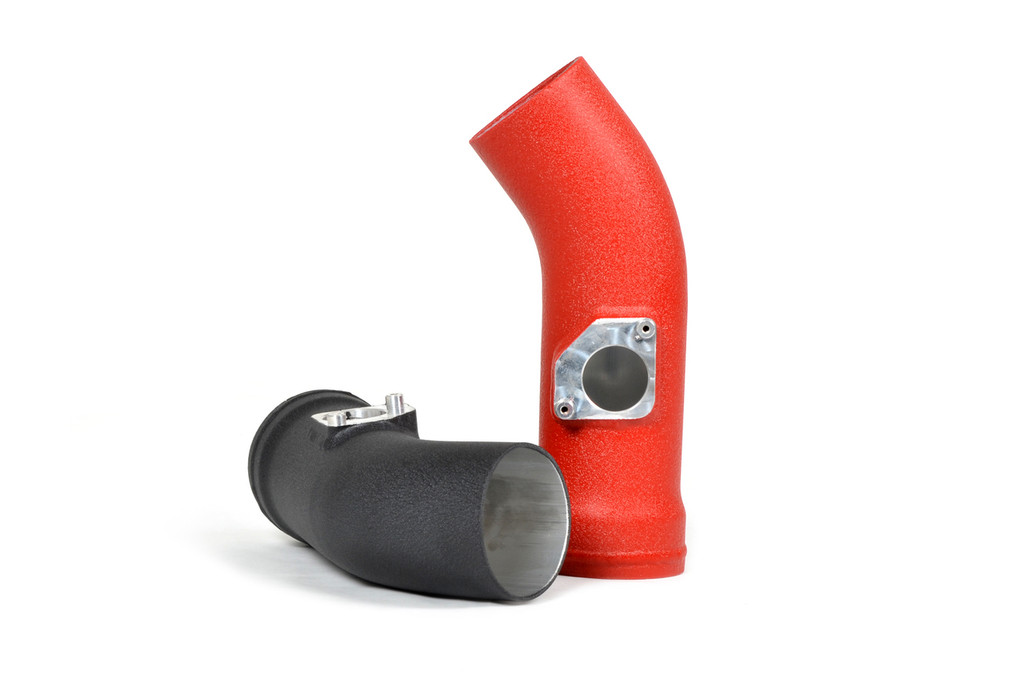 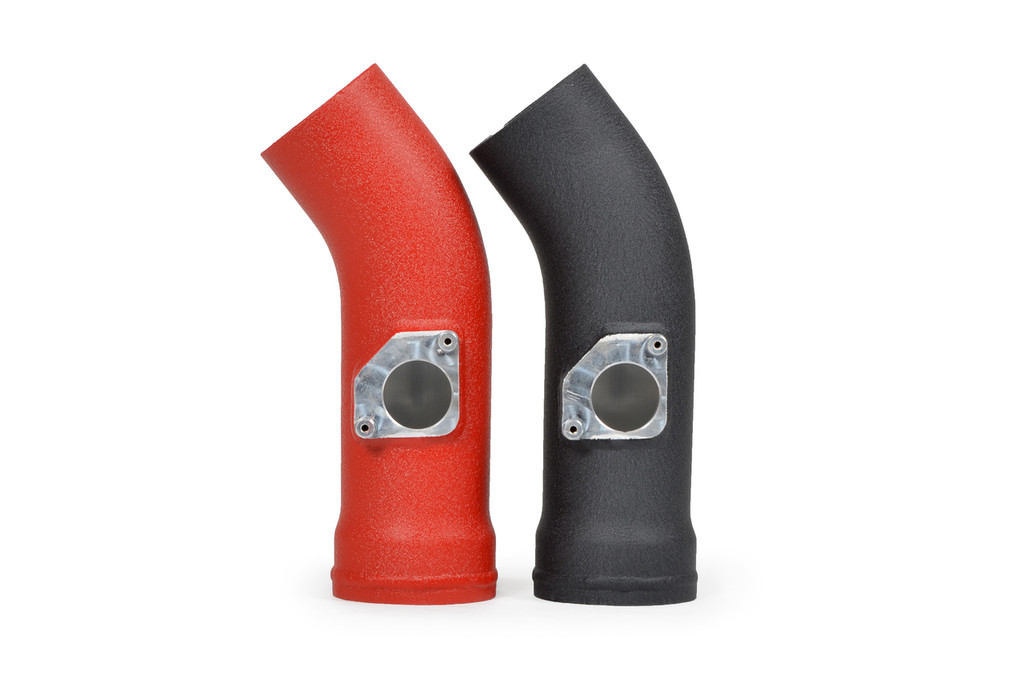 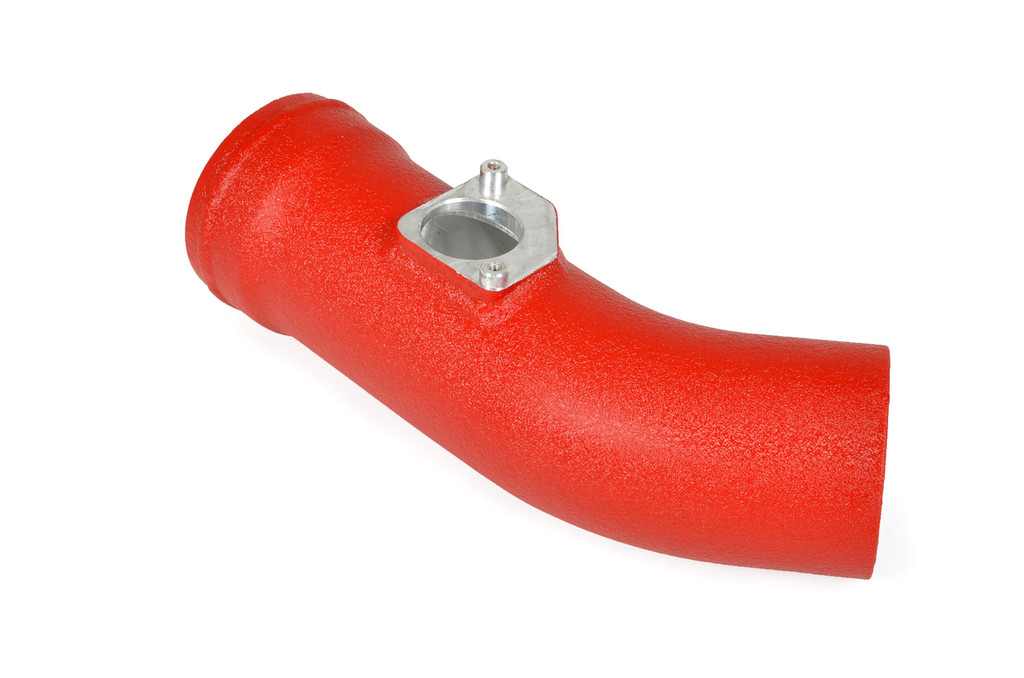 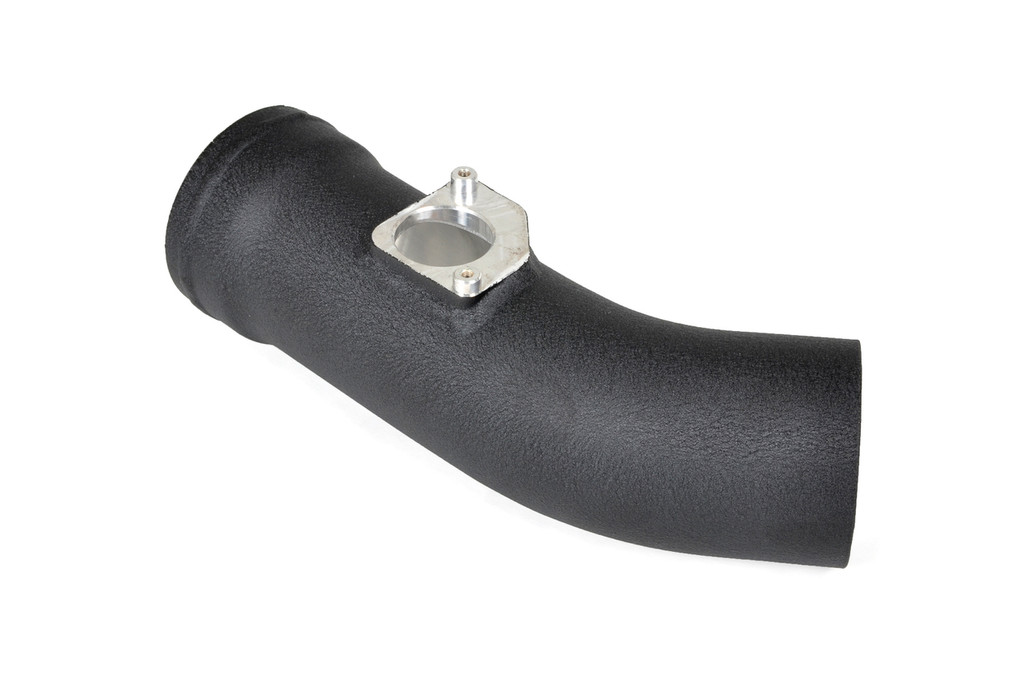 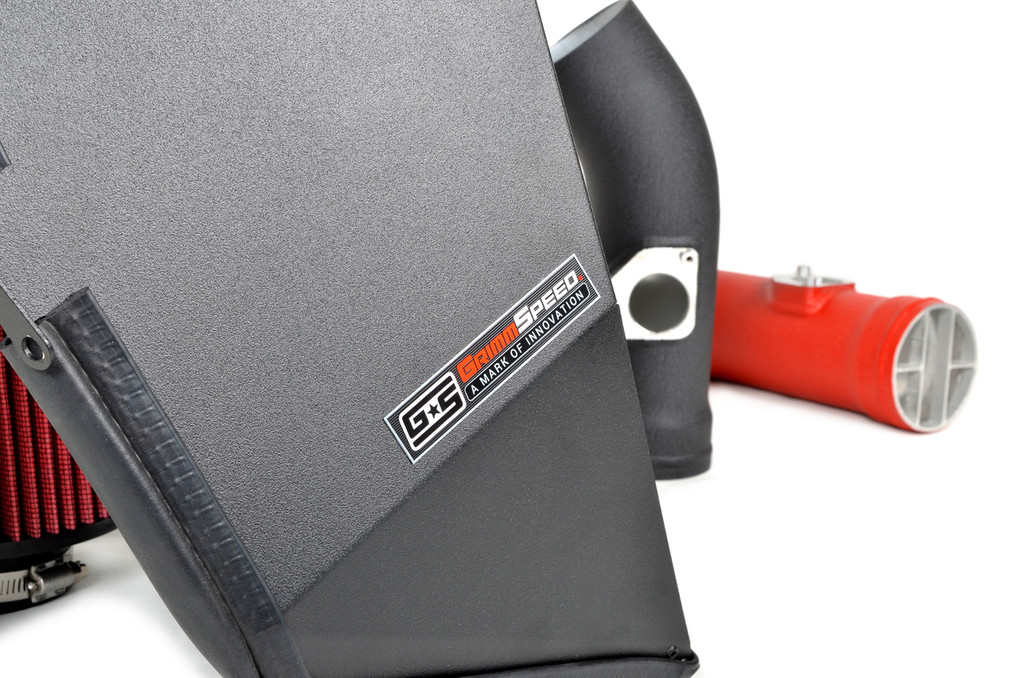 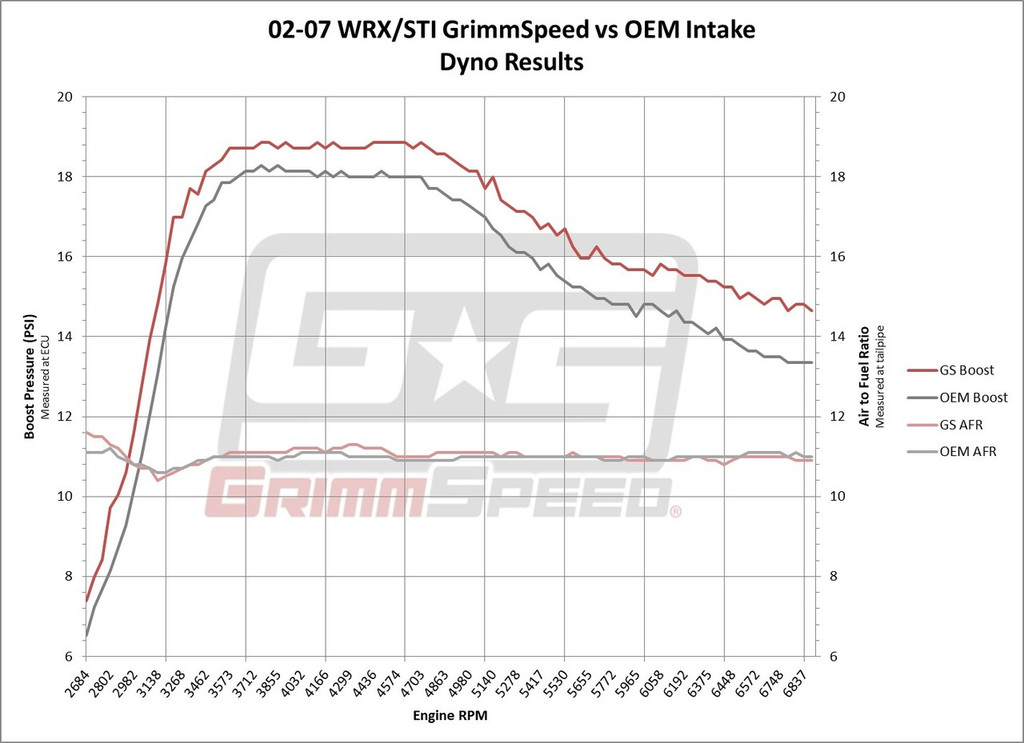 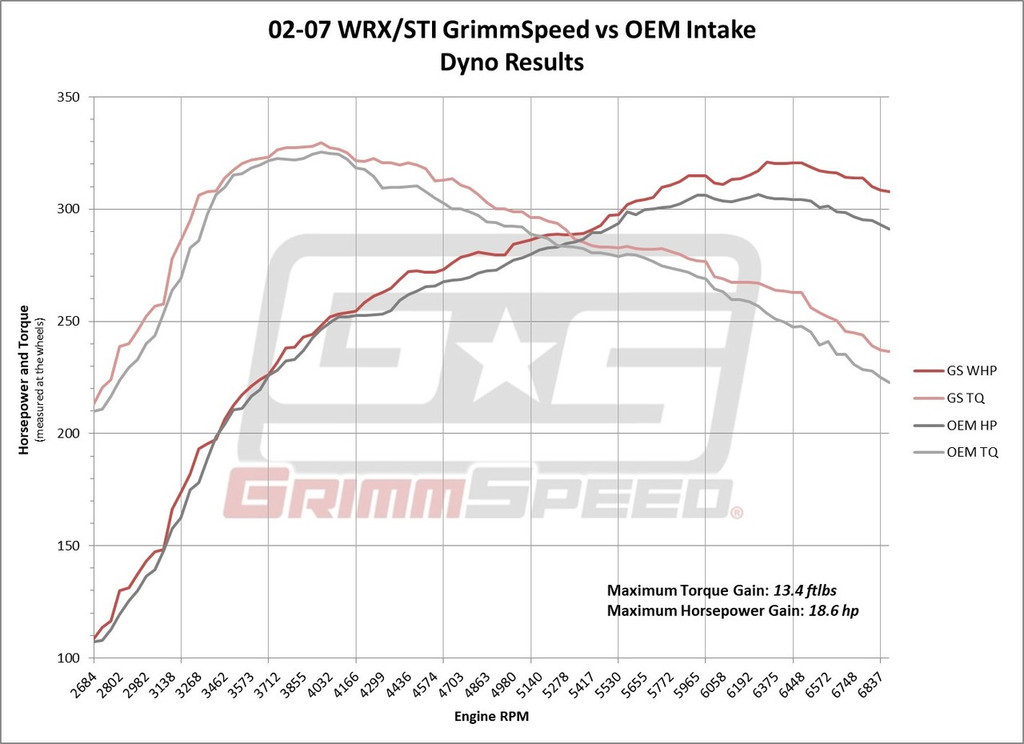 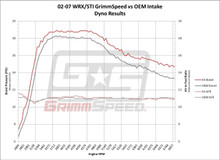 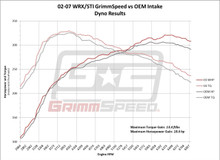 Finally a GD intake with the looks to match its performance.

It’s no secret that GrimmSpeed intakes feature performance and aesthetics that lead the pack.  With years of design theories and knowledge gained from our successful intake program, we have developed solutions that increase power and are very easy to install and tune.  The only thing we were missing was an intake system for early models, and after nearly two years of development and testing we are extremely proud to offer what we feel is the best intake for your 2002-2007 Subaru WRX and STI, and 2004-2008 Subaru Forester XT.

Our design requirements for this intake are similar to our others: the intake should reduce as much restriction as possible, it should be easy to tune and accurately measure incoming airflow, it should properly filter out potentially harmful particles, and it should look like something you’re proud to have in your engine bay. 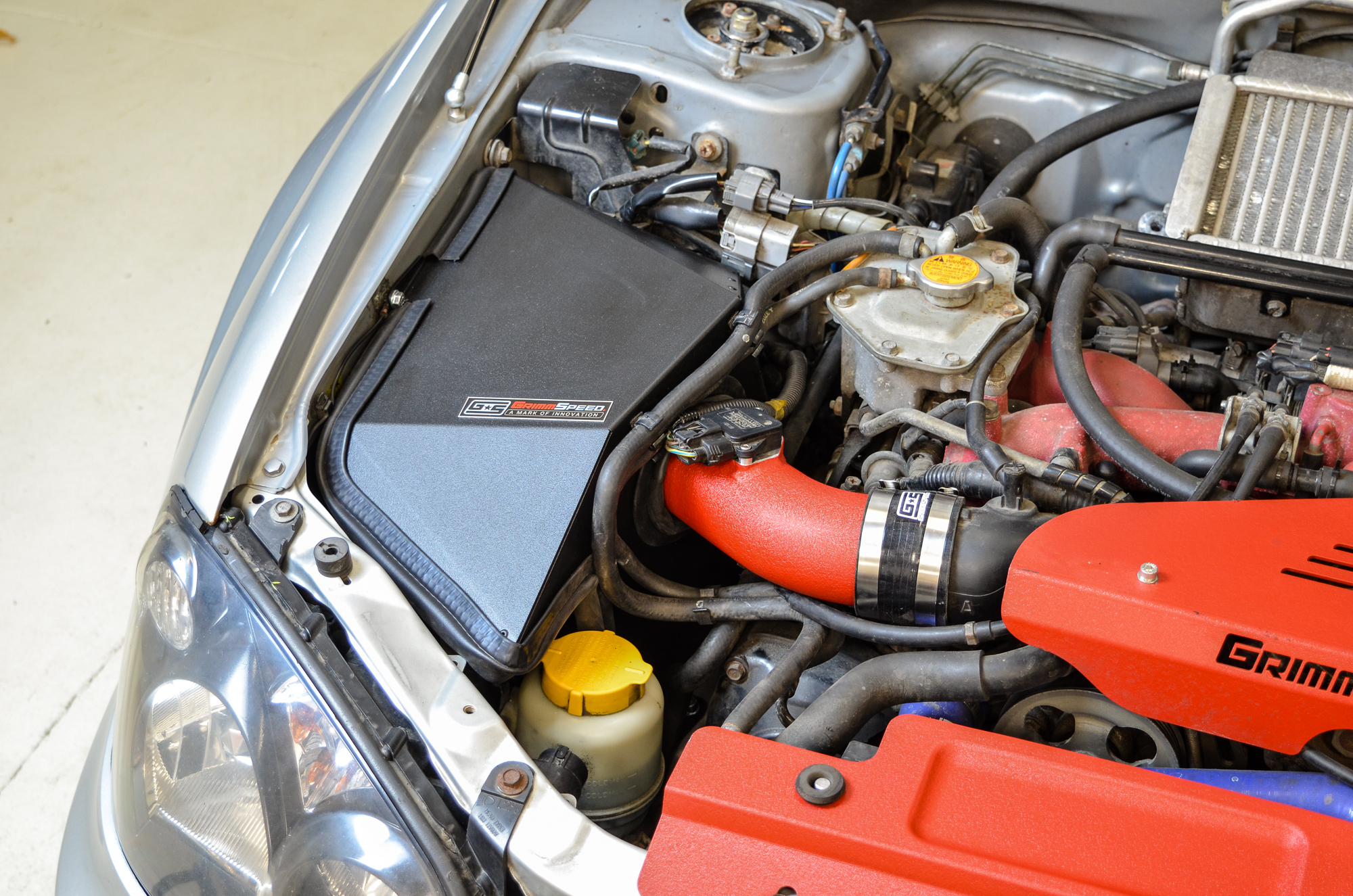 We designed this intake to meet these goals by using only minimal bend angle and pipe length which helps to decrease restriction.  Additionally, our low restriction washable air filter helps here too, while still filtering particles down to 5 microns.  We have also incorporated an air straightener into our design, an invaluable feature that was not utilized on the OEM airbox until later models.  Finally, we have continued our “StealthBox” heatshield design, utilizing it to not only keep hot air away from the air filter, but to cover up unsightly components such as the ABS pump.

Less obvious features of this intake include the location of the air filter.  Specifically that we made sure that the filter is not close enough to the ground such that water/hydrolocking is a concern.  The heatshield also contains provisions to mount the factory clips that hold the two coolant hoses that would traditionally mount to the OEM airbox. This keeps them out of the way and maintains a clean aesthetic.  The design of the heatshield also acts to hide the power steering pump reservoir, but does not hinder inspection or filling.  Overall what is accomplished is a true hybrid of traditional Cold Air Intakes and Short Ram Intakes, with all the advantages and none of the compromises. 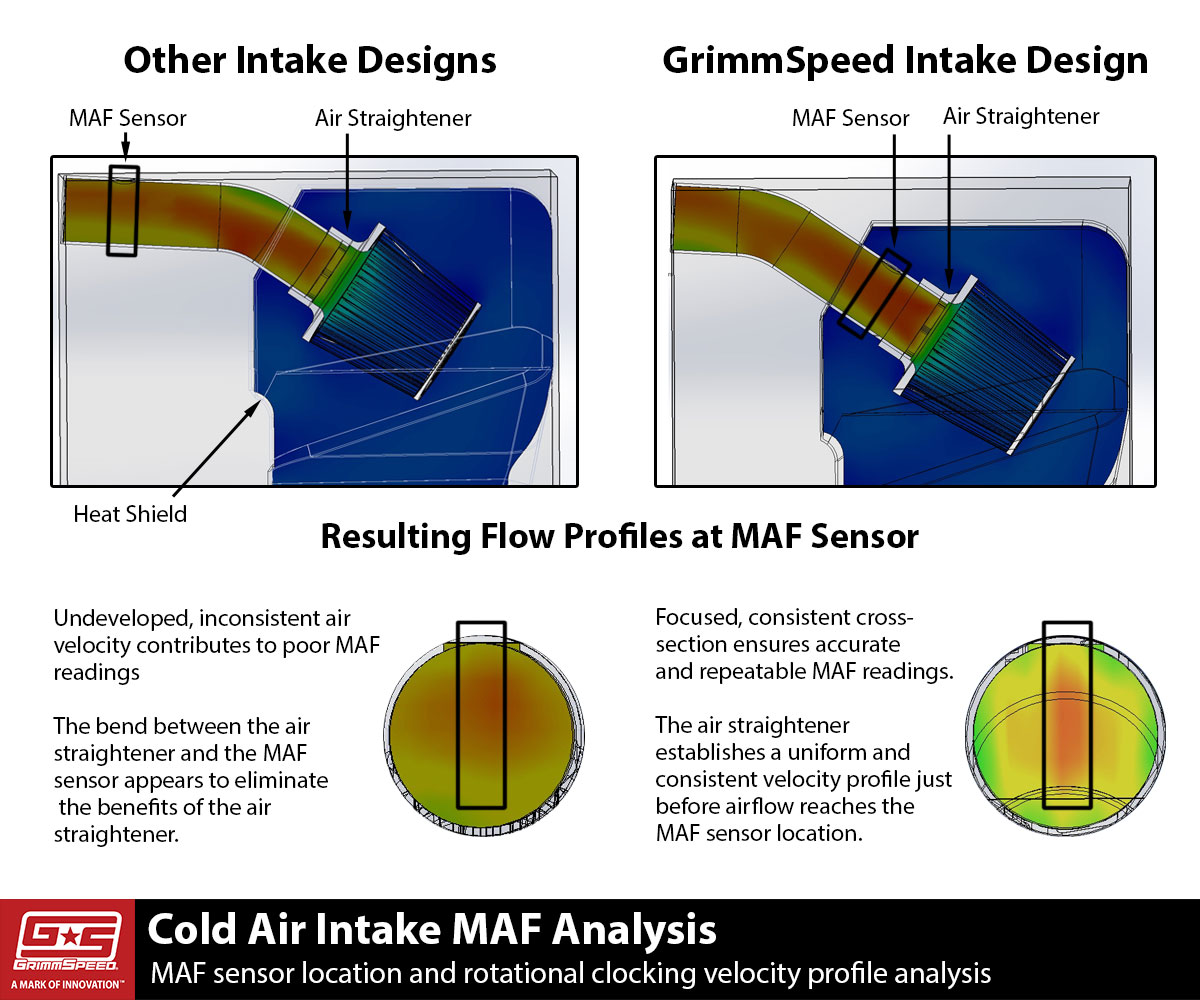 This engineering study from our 08-14 design above illustrates the importance of understanding how air moves within the entire intake system. The figure shows how the GrimmSpeed intake design compares to other intake designs with respect to MAF placement and how that affects airflow readings. Since the MAF sensor samples the velocity of incoming air to measure flow in the center of the tube, having an accurate velocity profile at the sensor is the only way to accurately measure airflow.  Even though the diameter of our intake is the same as the OEM airbox that alone does not guarantee accurate readings.  The position and clocking of the MAF with respect to the entire system is also very important.  All of these seemingly small details end up being extremely important to how the intake affects how the incoming air is measured by the ECU.

In true GrimmSpeed fashion, no corners were cut in the fabrication of each and every one of these intakes. The aluminum heat shield is laser cut, CNC bent and riveted together before receiving a heavy duty black texture powdercoat. MAF flanges are CNC machined from 6061 aluminum and the intake tube is fabricated from 5052 aluminum and CNC bent.  The air straightener is laser cut from 6061 aluminum as well, and tumbled before the entire assembly is TIG welded by our expert welders. After welding, each tube receives our heavy duty wrinkle powdercoat and is inspected and cleaned to ensure maximum performance and reliability.

At GrimmSpeed we love tuners and we like to make sure they love us back. Our intakes are notoriously easy to tune, and this one is no different.  The consistency of the airflow through the MAF sensor makes this intake very predictable and is as easy to tune as the stock airbox. While pro-tuning is always recommended, the Cobb OTS AccessPort Maps can sometimes provide a safe temporary alternative based on your vehicle and level of modification. 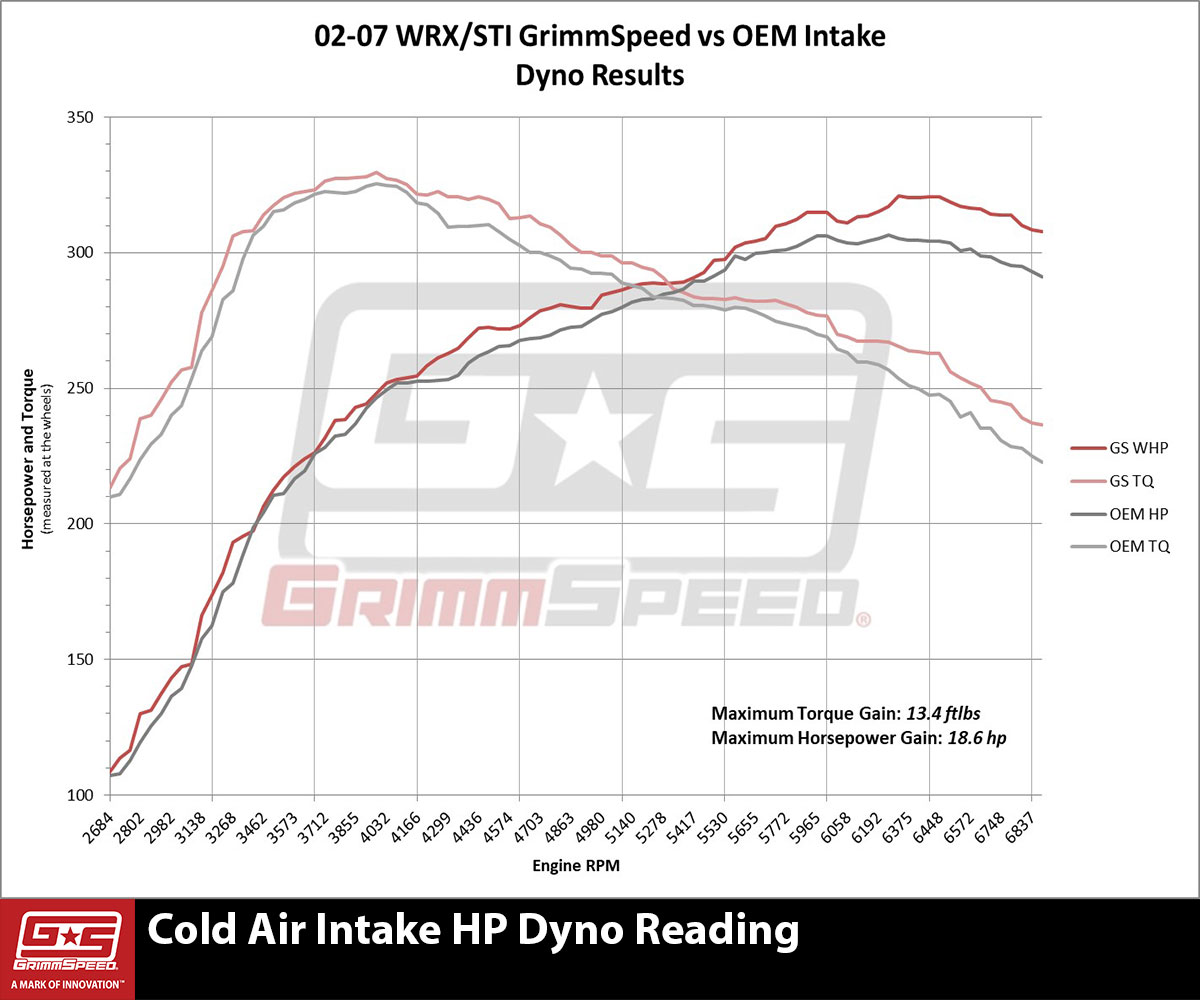 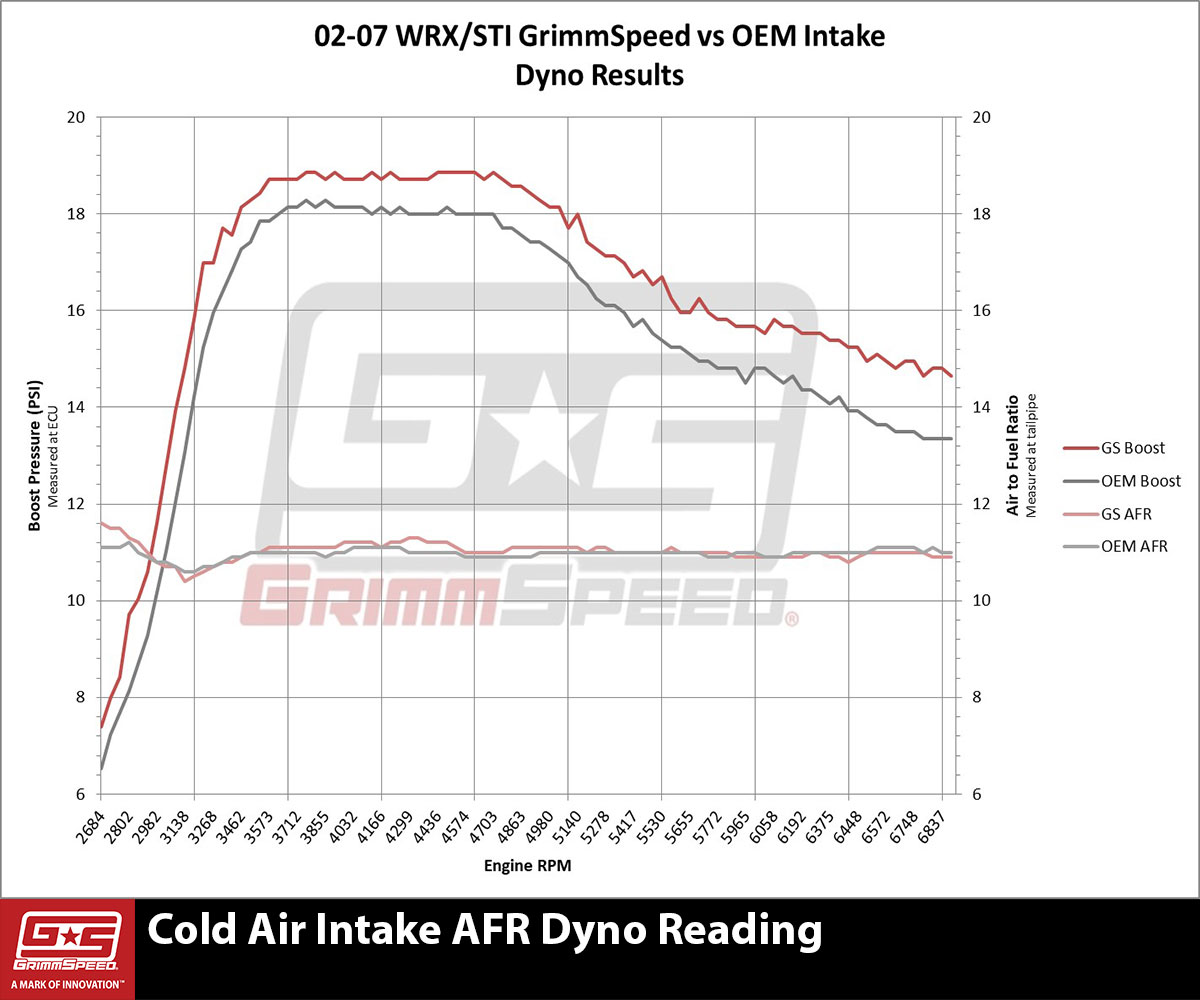 Dyno testing was completed on a 2006 WRX, equipped with a GrimmSpeed 3-Port EBCS, Catted Downpipe, EWG Up Pipe and TMIC, being force fed by a VF39 on 91 octane.

We used a testing methodology to show a difference between how a change to only the intake affects the power output, boost, and air to fuel ratios.  The car was first equipped with a Cobb OTS Stage 2 tune and was modified only for the VF39 and external wastegate.  The airbox was OEM, but with a K&N drop in filter.  The tune was then verified and ran multiple times for a boost target of 18psi and an AFR of 11:1.  Next, we installed the GrimmSpeed intake and performed a dyno pull.  As expected, the tune was a little too rich, so the tuner adjusted fueling to compensate.  The goal was to make the exact same AFR as our OEM airbox pulls, and the tuner accomplished this in only three total pulls on the dyno.

The result of this pull, with absolutely no changes to the map other than adjustments to match AFR, was an increase in horsepower and torque nearly everywhere in the entire RPM range.  There are maximum gains of over 13 ftlbs and 18 hp, as shown in the chart to the left.  The chart on the right demonstrates that the design of the GrimmSpeed intake system has decreased restriction over the stock system (even with an aftermarket drop in filter).  This chart shows that while the AFRs for the pull are exactly the same, the gains in peak boost have increased by almost .75psi.  Even more important is the increased boost at redline of 1.5psi.  An increase in boost from only the intake change means that it has removed that much restriction from the intake system.  Just looking at the boost curve shows that these relatively small turbos start to run out of breath at higher RPMs, and that the much needed increase in boost that the GrimmSpeed intake creates results in a substantial power gain all the way to redline.

The best intake your hard earned money can buy

I remember bugging the guys at the Grimmspeed booth at Big Northwest about a GD intake... 2 years in a row. You don&#039;t know how stoked I was when this finally saw the light of day. The install was simple as can be and, oh... the turbo noises you&#039;ll hear once that OEM airbox and &quot;snorkus&quot; are gone. Also, it just feels like the engine breathes so much easier now. Imagine the gains once I get a proper tune. Bonus points for making the engine bay look nice and clean.

Best on the market !

This should help anyone new or not very knowledgable of parts . Owning a 2005 saab 92x aero I decided to finally add this cold air intake , everything bolts the same as the wrx models its designed for and install is really easy . worst case follow grimmspeeds youtube channel for install instrutions for the trim fitment lol . I&#039;m currently in the middle of tunning and have already noticed a huge difference in performance from this product. This I would say in my own opinion is far better than cobbs plastic box ( dont get me wrong Cobb is good ) but when it comes down to this intake getting to the filter and installing to aftermarket turbo inlets ( tomei for me ) Damn easy . So if youre in the market for a nice cold air intake I suggest this one . Also the bonus of making the engine bay a bit more sleek by hiding the abs module